Even though it comes first in the Bible, Genesis 1  represents the youngest of three Israelite creation traditions. As happens in culture and even inspired religion, traditions of the past were once again adapted and (re)appropriated to meet the needs of the time. 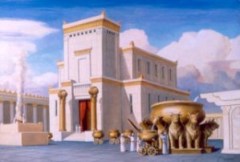 Genesis 1-2:4 is generally believed to have come from a priestly tradition associated with the tabernacle/temple, and received its current form sometime around the Babylonian exile (which explains some of its anti-Babylonian polemics, which go totally unnoticed by modern readers.) Several characteristics of Genesis 1-2:4a suggest priestly and temple associations, but the most important for our purposes here is the emphasis on sacred time over sacred space (see here, #3 in particular.)

If you’ve ever talked to Jehovah’s Witnesses about birthdays, you know they don’t celebrate them, because no one in the Bible does. And this is generally true, because Israelites weren’t the ultra-specific hour-by-hour calendrically obsessed society we are today; as with literacy, they neither had the means nor the utility for it. It’s unlikely they knew when their birthdays were. This holds true, btw, for some Middle Eastern people today. A relative working in Saudi Arabia with several hundred natives confirms that many of them not only don’t know their birthday, but have no idea how old they are. The only people who concerned themselves about specific days and years were either royal scribes or the priests/Levites. Scribes needed to chronicle the king’s doings, and the priests needed to be aware of the multiple overlapping calendars of holy days and holy years, as well as any time-based prescriptions in the Torah regarding purification and the like.

How does concern for time figure in to Genesis 1? First, the sun and moon, created on the fourth day, are “for signs, and for seasons, and for days, and years.” The signs and seasons here specifically refer to the religious holidays and holy days the priests needed to track, not Israel-in-Egypt signs or agricultural seasons. The two terms together are better understood as a hendyadis, “the appointed times” whether days or years.

The creation account in Genesis 1 has strong parallels with the account of the construction of the temple/tabernacle (another priestly association.) Deities rest in temples and only in temples; For God to rest on the seventh day indicated that God’s creation/temple was finished, that he had taken up residence therein, and therefore, life, the universe and everything would function as it should. (This is really an understated summary of a mind-blowing idea that finds its most concise application in John Walton’s Lost World of Genesis One, proposition 7 onwards but really, read the whole thing.)

Recall that the Babylonians destroyed Israel’s sacred space large and small, defiling the holy land and destroying the Jerusalem temple. When this account of creation was written down, what did it emphasize? It minimized the recent destruction of the temple by emphasizing that the universe itself is God’s temple. There may no longer be sacred space for the Israelites, they cannot carry out the nearly 1/3 temple-related of the 613 commandments in the Torah, but they can still keep sacred time, the Sabbath, the seventh day.

And that is why I think the priestly authors intended the days in Genesis 1 to be 24-hour days; to make them “symbolic” of long periods (the “day-age” theory) weakens to the point of worthlessness the divine model of resting on the seventh day, which the Israelites could emulate in Babylon, keeping that sacred time because they couldn’t keep the sacred space. The “day-age” theory doesn’t have a leg to stand on, linguistically speaking. Heb. yom “day” can indicate a general period of time, but only in particular idioms, which we very much do NOT find in Genesis 1.

But this innovation of creation in a seven-day period was added for very specific intent. The Israelites were in Babylon, and the purpose of the account was to counter the Babylonian creation theology (which I haven’t talked about at all), and emphasize what the Israelites *could* do while “in a strange land”, not provide some context-free scientific revelation about how long material creation took (assuming it’s material creation, on which, again, see Walton) or how it was done. The important thing there is not the creation per se, but the resting on the seventh day. “For in six days the LORD made the heavens and the earth, the sea, and all that is in them, but he rested on the seventh day. Therefore the LORD blessed the Sabbath day and made it holy.” (Exo. 20:11)

[This, btw,  is exactly the kind of thing I’d be writing in a book on Genesis, except less terse, more documentation, more hedging, and more refinement. I cranked this out at work prompted by Dave’s thread on Seminary and creationism, after deciding it was much too long for a comment.]

← Statements on Heavenly Mother
Desert and a Just Society →

32 comments for “Priests, Babylonians, and Seven 24-hour Days of Creation”