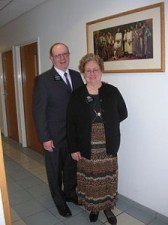 My surprise at this news came not just because I was unfamiliar with it, but because it ran counter to my assumptions. Here in the U.S. we have a growing senior population, due to the entrance of the baby boom into retirement. I have therefore assumed that the number of senior missionaries was going up, not down.

Of course, I realize that I don’t have much information to justify this assumption, and the demographics behind the senior population in the Church is more than just what is going on in the U.S. As is almost always true, its likely much more complicated than I think. However, I don’t have enough information to even make reasonable guesses at the reason.

I’m also assuming that the reasons don’t have anything to do with Church members becoming less faithful or less willing to serve and sacrifice. From what I’ve seen there hasn’t been any great change in the number of faithful seniors during the past decade — so why would the percentage wiling to serve missions change?

There is a small silver lining in all this. For the past decade or more the total number of missionaries declined from about 60,000 in the field to a bit more than 50,000 at the moment (see line 39 of this spreadsheet). I had assumed that this decline was mostly due to a decline in young men serving. It now appears that one of the reasons for the decline is a decline in senior missionaries, which means that the number of young men and women serving hasn’t gone down as much as I had thought.

However, that doesn’t really answer the basic question: Why have the number of senior missionaries gone down so drastically in the past decade? Does anyone have any insights?

← Desert and a Just Society
Circuitous Machinations – On Mormon Theology →