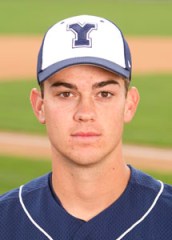 Last week Major League Baseball held its most important annual draft, indicating interest in more than 1,500 possible players. As far as I can tell, just two of them are Mormon, down from 6 last year.

I’ve diligently searched the list of those drafted for other Mormon players, but I wasn’t able to identify anyone as Mormon, based on articles and web pages that turned up in my searches. Of course, there are likely some who are Mormon, but I couldn’t find any indication of that.

The two LDS players drafted were both BYU players, and both were drafted in the 29th round:

While it does make sense that fewer LDS players would be drafted this year, after an extraordinary year last year, I didn’t expect just two players drafted, and I suspect that other drafted players are Mormon but haven’t served missions or expressed interest in serving an LDS mission, which is the primary way that their religious beliefs become known. Of course, I’d welcome any additional information about Mormon players in baseball.

← The Current State of Worship Options
Women and Meetings →