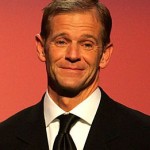 Just a week after he was named chef de mission of the U.S. Olympic Team for 2012, Peter Vidmar has resigned because of objections to his beliefs—specifically his opposition to same-sex marriage. Vidmar, an LDS Church member and a member of the gold-medal winning 1984 U.S. Olympic gymnastics team. He is also the highest scoring gymnast in Olympic history.

But in 2008 Vidmar publicly campaigned for Proposition 8 in California.

I’m a little disturbed at this turn of events. I’ve always hoped that in the U.S. we would be tolerant of others beliefs. Clearly Vidmar’s beliefs are the issue. And because those beliefs are shared by most active LDS Church members and the Church is widely associated with the Proposition 8 campaign, mormons are also the issue. If it isn’t yet obvious, we now have to know that Mormons are at risk for this kind of reaction.

But I don’t think the issue now is about Proposition 8 or gay marriage. The question now is how we as Mormons view and react to this event. Should Vidmar have resigned? Should opponents of same sex marriage now put pressure on the U. S. Olympic Committee to not give in to this kind of attack? Shouldn’t we be protected legally from this kind of attack?

Political disagreement spills over into other areas of life all the time. It affects personal lives, businesses and even religion. In some ways it seems like there is no “private” anymore, where politics may not intrude.

What disappoints me about the activists in this case is that this mixes two unrelated things: Vidmar’s personal beliefs, public as he made them in the campaign, and his ability to perform the duties of <em>chef de mission</em>. Perhaps I don’t understand the position very well, but I have a hard time understanding how the beliefs could adversely affect the position.

This isn’t a government position, so, from my limited legal knowledge, this isn’t about freedom of religion. Had Vidmar been fired, as I understand it, employment discrimination might be an issue (depending on the facts). But instead he resigned, seeing that his presence could cause problems for the athletes.

The U.S. Olympic Committee can, except for, use whatever criteria they think proper to determine who it names to this position. While they apparently didn’t think Vidmar’s beliefs were an issue when they named him, the fact that they became an issue will, no doubt, affect who they chose in the future. Vidmar himself apparently sees the issue as a public relations problem, making the following statement on resigning:

“I wish that my personal religious beliefs would not have become a distraction from the amazing things that are happening in the Olympic movement in the United States. I simply cannot have my presence become a detriment to the U.S. Olympic family.

“I hope that by stepping aside, the athletes and their stories will rightly take center stage.”

In our society we allow everyone to express their beliefs as they wish, and to put pressure on privately controlled institutions like the Olympic Committee, as well as governmental institutions. Whether or not I like what these activists did in forcing Vidmar to resign, I must acknowledge that they have a right to do it. And I’m quite certain that, given the right circumstances, their political opponents would do (and probably have done) the same thing to advance their cause. What our society believes to be politically correct always allows majorities to make minorities uncomfortable, and in many cases using this pressure has led to important changes for the better.

I would not want to keep either side from being able to do this kind of thing. It seems to me that interest groups need to be able to put pressure on institutions, governmental or not. I’m sure there are those who would make me object also, and I’d want to be able to try to influence an institution like this, if possible.

I fear that some Mormons will take this and call it persecution, or call those who used this influence anti-mormons. They may be anti-mormon, but it is certainly not persecution. No right has been impinged, nor has our ability to believe as we wish been infringed. This case is merely a consequence of stating belief publicly. If you speak up, there are consequences.

Even the idea that Vidmar’s attackers are anti-mormon may be suspect, because their motivation is more about pushing for same-sex marriage than against Mormons. Had Mormons not been so involved in supporting proposition 8, would these activists even be thinking about Mormons?

It seems, then, that all this is just the consequences of stating and working for an unpopular belief. Our only choices are to either get used to it, or change the belief.

81 comments for “Persecution or Freedom?”