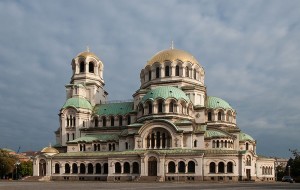 The idea of a godhead fascinates me. If a god is omnipotent, then why do we need three of them (or more, depending on your interpretation)? Here’s my entirely-speculative take on it. (Now including advice on how to raise your kids, too! I know, I know, it’s hard to find people who are willing to offer unsolicited parenting advice. You can thank me later.)

One of the hardest parts of being a parent is figuring out when to be strict and when to be lenient. When your child throws a temper tantrum over something trivial, do you snuggle him and say, “I bet you’re tired and hungry. Here, let me make you some soup and read you a story,” or do you say, “This is unacceptable behavior,” and put him in time out?

Kids need both, but we can only do one of them at a time. Over time, our kids develop an expectation of how each parent is likely to react in a given situation. Impressions aren’t especially nuanced, so kids tend to paint their parents with broad strokes, e.g. “My mom is so strict”, even if the mom is in fact pretty even-handed, but tends to err on the side of caution over permissiveness.

But what if you were a perfect parent? What if you knew exactly when to indulge and when to challenge? The sad truth is that it wouldn’t matter much. The child would still develop an impression over time, accurate or not, that you are soft or hard (or some other overly broad generalization). This is how impressions and relationships work — they develop subjectively, independent of the objective actions of the relationships’ participants.

This is one advantage of having two parents. The parents together provide a spectrum of responses that, I imagine, would be harder for single parents. It means having two reference points for perspective, like having two eyes provides for depth in vision. Together, the parents can provide simultaneously provide two different experiences — a stereo relationship — which is impossible for any parent to do alone, no matter how perfect.

(This isn’t a criticism of the immense and amazing work that single parents perform. This limitation of perspective isn’t due to a failing on the parent’s side; it due to a limitation in how we subjectively perceive others.)

Our perspective on divinity especially emphasizes the attributes of mercy and justice. We believe in a God who is both merciful and just. I imagine that both Heavenly Father and Jesus Christ are equally merciful and equally just, and either one of them has the power to execute the plan of salvation. However, just as we pigeonhole people into categories like “strict” or “lenient”, we tend to force gods into a false dichotomy of being either merciful or just. The godhead addresses this by giving us two separate gods to paint. This allows us to work around the limitations of an oversimplified mental model, since now we have one God who can be the Just One, and one God who can be the Merciful One. In other words, we have multiple gods in our godhead, not because they just aren’t almighty enough to do the work alone, but because we aren’t intelligent enough to conceive of a being as both merciful and just.

I like this model, though I certainly don’t believe it’s at all doctrinal (however, I don’t think it contradicts any doctrines either). As a limitation, it doesn’t really explain why the Holy Ghost is necessary. However, on the plus side, it breaks out from the commonly held, idiotic godhead roles of a God who can’t forgive His children unless He excruciatingly punishes His Son first. I don’t know how the atonement works, but I’m sure it’s not like that.