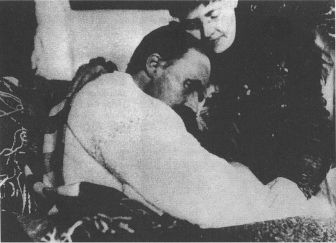 I’m currently through the beginning of Nietzsche’s The Will to Power. I like what I’ve read, and I’ve identified a few possible Nietzschean approaches to Mormonism.

Now I’m no educated philosopher, and I’m only basically familiar with Nietzsche’s work. That said, here we go.

1. Joseph and Neitzsche as two men whose respective philosophies are fundamentally similar. Nietzsche’s states that “it is in one particular interpretation, the Christian-moral one, that nihilism is rooted” (1.1), and that “the sense of truthfulness, developed highly by Christianity, is nauseated by the falseness and mendaciousness of all Christian interpretations of the world and of history” (1.2). Joseph expresses similar feelings in his youthful response to Christianity, saying, “[N]otwithstanding the great love which the converts to these different faiths [Baptist, Presbyterian, and Methodist] expressed at the time of their conversion, and the great zeal manifested by the respective clergy…it was seen that the seemingly good feelings of both the priests and the converts were more pretended than real…that all their good feelings one for another, if they ever had any, were entirely lost in a strife of words and a contest about opinions” (JS-H 1:6). More powerfully, Joseph relates the words of God Himself, saying, “the Personage who addressed me said that all their creeds were an abomination in his sight; that those professors were all corrupt; that: ‘they draw near to me with their lips, but their hearts are far from me, they teach for doctrines the commandments of men, having a form of godliness, but they deny the power thereof'” (JS-H 1:19).

In both men’s viewpoints, I identify the fundamental complaint as being the perceived moral bankruptcy of contemporary Christianity. Nietzsche responds by explicitly declaring himself antichrist. He gives one possible reason for this reaction when he states, “Radical nihilism is…the realization that we lack the least right to posit a beyond or an in-itself of things that might be “divine” or morality incarnate” (3). In other words, I believe he is stating that no man — be it clergy or layman — has any divine communication, and so all theological interpretations are equally groundless. Joseph, on the other hand, responds to apostate Christianity in the opposite way — he obtains direct revelation from God. Since the lack of revelation is (in my mind) the grounds whereon Nietzsche rejects his contemporary Christian sects, Joseph solves the problem of Christianity in the only way Nietzsche could find valid.

2. Latter-Day-Saintism as Nietzsche’s “Revaluation of All Values”. One of Nietzsche’s stated intended goals with The Will to Power was to “attempt a revaluation of all values.” One reason he gives for this is that, “[T]he highest values devaluate themselves. The aim is lacking; ‘why?’ finds no answer” (2). I understand that to mean that the stated goals, purposes, and reasons provided to man in sectarian Christianity are, in Nietzsche’s estimation, fundamentally absurd. They do not ultimately lead to a goal that is valuable to the individual for its own sake.I believe that the doctrines Joseph taught in the Church of Jesus Christ of Latter-Day Saints effectively revalue many of the values that Nietzsche saw as untenable in his contemporary Christian sects, restating the purposes of Christianity in terms that make religious adherence individually meaningful.

Nietzsche more explicitly states the claim I make for him above:

We deny end goals; if existence had one it would have to have been reached.

So one understands that an antithesis to pantheism is attempted here: for “everything perfect, divine, eternal” also compels a faith in the “eternal recurrence.” Question: does morality make impossible this pantheistic affirmation of all things, too? At bottom, it is only the moral god that has been overcome. Does it make sense to conceive a god “beyond good and evil”? Would a pantheism in this sense be possible? Can we remove the idea of a goal from the process and then affirm the process in spite of this? …

I believe that Joseph goes straight to the heart of this in what I consider to be the most explicit description of the afterlife given in any belief system: “When the Savior shall appear we shall see him as he is. We shall see that he is a man like ourselves. And that same sociality which exists among us here will exist among us there, only it will be coupled with eternal glory, which glory we do not now enjoy” (D&C 130:1-2). In other words, Joseph describes eternity not as a goal and a reward, but as an eternal now, inhabited by a God who is a man. His heaven has no end goal, but is an eternity of being who we are (“coupled with eternal glory,” however that might be interpreted,) which is directly in line with Nietzsche’s rational heaven, as depicted in the quotations above.

The correlation continues in Nietzsche’s following paragraphs, including, “There is nothing to life that has value, except the degree of power — assuming that life itself is the will to power.” Joseph interprets Abraham as conversing with God, who states, “These two facts do exist, that there are two spirits, one being more intelligent than the other; there shall be another more intelligent than they; I am the Lord thy God, I am more intelligent than they all” (Abr. 3:19). To me, the important distinction here is that secular Christianity defines God as powerful in an absolute and abstract sense, with terms like “all-knowing” and “omniscient”. In contrast, Joseph’s God’s power is not abstractly great, but comparatively great. He is not God because He knows all, but because He knows more than anyone else. In Joseph’s own teachings (I’ll need to find the source on this) Joseph defines Godhood as essentially being beyond the power of any other person or party.

3. Joseph as a realization of Neitzsche’s ubermensch. Nietzsche’s nihilism is not a fundamental pessimism toward existence, but rather a specific pessimism toward the worldview projected by his contemporaries: “Modern pessimism is an expression of the uselessness of the modern world — not of the world of existence” (34). He also states that this nihilism/pessimism is not an ultimate philosophy, but rather one that will necessarily be adopted by the world until it can dissociate itself from traditional Christian values and develop a new system that actually makes sense: “Now that the shabby origin of these [moral] values is becoming clear, the universe seems to have lost value, seems “meaningless” — but that is only a transitional stage” (7).

While I don’t have the sources on hand, I believe that Joseph-the-individual could qualify as Nietzsche’s ubermensch described in Thus Spake Zarathustra, the kind of person he imagined inhabiting the world-beyond-nihilism. Joseph was immensely life-affirming, he defied social convention to extremes, claimed and obtained power, and accomplished great works, not only in a moral sense but in a this-worldly physical sense — things like city-building, religion-making, and identity-defining. I’ll have to look back at Thus Spake Zarathustra for details, but I think this could be an interesting vein to follow.

26 comments for “Antichrist to an Antichrist”