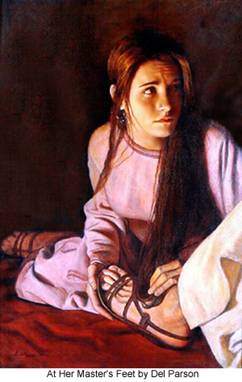 Six days before Passover (hence Friday if Passover was on the following Thursday evening and Saturday if it was, as John seems to suggest, at sunset on Friday), Martha served a special dinner at the home in Bethany that she shared with her brother Lazarus and her sister Mary.  Jesus was the guest of honor, and during the course of the meal, Mary entered and anointed Jesus’ feet.

Much of this scene is paralleled in Mark 14:2–9 and Matt 26:6–13, but these two evangelists locate it between the Olivet Discourse and Judas’ agreement to betray Jesus later in Jesus’ final week.  Accordingly its explicit symbolism, connecting it with Jesus’ coming death and burial, will be discussed further on Wednesday.

However, as a prologue to our journey through the Savior’s final week, considering another, implicit level of symbolism may provide depth to Jesus’ role as “the Christ.”  In ancient Israel, Davidic kings and the high priests were anointed—in Hebrew such an anointed figure was a masiach, or messiah.  In Greek he was known as christos, or Christ.  With this in mind, John’s placement of the anointing before the Triumphal Entry can be seen as portraying Jesus as the rightful king who enters Jerusalem with authority.  The location of the anointing in Mark and Matthew on Wednesday of Holy Week signals a shift in emphasis as Jesus begins to function as the anointed priest who makes the ultimate sacrifice for his people.

The anointing by Mary on Friday or Saturday and that by the unnamed woman on Wednesday did not make Jesus the Christ, a position that he held from the foundation of the world.  But these incidents can serve to remind us of the dual nature of Jesus’ mission, as we recall that he is not just a messiah but was in fact the Messiah.  They also provide a stirring testimony of the faith of these women.  Whereas the disciples, who had gained powerful testimonies of who Jesus was—the Son of God—nonetheless revealed on the road to Jerusalem that they had not quite come to understand what he had come to do, these women, whom Jesus said had anointed him in preparation for his burial, seem to have known that he had come to Jerusalem to die as a sacrifice for all.

Click here for links for analysis of and reflection on each of the days of the final week of Jesus’ life.

← A Mormon Image: Ye are the Light of the World
Palm Sunday →

3 comments for “For the Saturday before Holy Week: The Symbolism of Jesus as Anointed King and Priest”