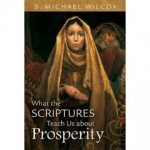 The Prosperity Gospel (which the linked Wikipedia article defines as “the notion that God provides material prosperity for those he favors”) is often associated with Evangelical megapreachers. [Note 1.] But we all know there is a Mormon variation of the Prosperity Gospel lurking behind the ubiquitous references to blessings and how to earn them that populate LDS books, sermons, and discourse. So when I started reading my review copy of What the Scriptures Teach Us About Prosperity (Deseret Book, 2010) by S. Michael Wilcox, I was hoping that at some point the author would distinguish the Mormon view of prosperity from the Evangelical version of the Prosperity Gospel.

The Mormon View of Prosperity

Alas, no. The book contains no explicit discussion of the Prosperity Gospel and no direct comparison of Evangelical and LDS views. The index offers no entries under Propserity Gospel, Rick Warren, Joel Osteen, Evangelical, or even Protestant. The best I can find is an entry for John Calvin, which leads to a passage on the value of work: “During much of European history, for instance, the upper classes did not work. … The laboring man was looked down upon. During the Reformation, however, John Calvin in particular struck upon Paul’s counsel to elevate work. All work was done for Christ; therefore, one should find contentment in it and take pride in doing one’s best. God would reward you.” (p. 74.)

So, absent comparisons, what is the Mormon view of prosperity? It is worth distinguishing between folk doctrine and scriptural doctrine. The author, a retired Institute instructor at the U, relates his experience posing the following questions to his students: Can you be rich and righteous? Can you be worthy and wealthy? The discussion invariably reveals a large majority who are sure there is no difficulty squaring riches with righteousness, and the author affirms that this is the case in discussions by all age groups, “from high school and seminary students, to university and institute students, to working professionals, to retired senators” (p. 2).

So I conclude from this early discussion that the Mormon folk doctrine of prosperity is that having lots of money is not a problem. That is actually a middle or neutral position between the polar views that money is a sign of God’s favor (the Prosperity Gospel) and the contrary view that money and questing after it are in some sense evil and that the rich, however defined, are somehow morally tainted. It seems that most of us Mormons are convinced money is neither an obstacle nor an aid to personal righteousness.

The Scriptural View of Prosperity

What then is the scriptural view of wealth? “There is very little about wealth in the standard works that is optimistic in nature. I usually ask the class if they can cite a single verse that speaks positively about money. In all my years of teaching, no class has produced a single verse.” Instead, the scriptures contain “a great deal of warning and counsel” (p. 2). The balance of the book consists of a balanced review and discussion of the “warning and counsel” regarding wealth and riches to be found in the Bible and in LDS scripture.

The easist way to give a sense of how this very readable book covers the topic is to simply note in bullet form some of the items that jumped out at me as I read it. The book discusses literally hundreds of scriptures on wealth and riches. Here are a few of them:

Besides citing and applying a wide variety of scriptures, the author of course offers the sort of good advice and commentary one expects from an experienced teacher with plenty of stories and observations to share. These nuggets for contemplation include:

The Law of Consecration

I don’t think the author would agree with this view (at least as I outlined it in the preceding paragraph). On the other hand, he talks more about the principles of consecration as a way of living than about the law of consecration as a social and economic system the early Saints attempted to put into practice. But how does one distinguish between the two as discussed in the Doctrine and Covenants? Contemporaneously, the revelations referred to an actual system the Saints were attempting to live. Only in retrospect do we have the luxury of bracketing the actual system or set of practices and extracting a set of abstract principles that can then be transplanted to a different system.

That is a complicated way to proceed. For example, the author references D&C 104:12-14 (all things are the Lord’s), then comments: “We are his [the Lord’s], all that we have is his, and we will one day account to him how we ran his property as steward. In one sense, we can’t give the Lord anything. It is all his anyway. Consecration is a recognition of this established fact.” (p. 175.) But two pages later he quotes D&C 42:32 (“Every man shall be made … a steward over his own property”) and comments: “Property does not belong to the state. It does not belong to the Church. It belongs to the individual, but with the caveat that the individual realizes that in the final analysis all belongs to God.” (p. 177.)

I’m not sure what “in the final analysis” means. Perhaps that’s equivalent to “after we’re all dead.” After we’re all dead, everything belongs to God. But we’re not dead, we’re still alive, so we’re still in the ownership regime described by the first clause, where property “belongs to the individual.” You have a free choice of what and how much of your property to contribute. What you do choose to contribute (or consecrate) is a sacrifice because you do actually own it and because you freely chose to give it up. If you contribute someone else’s property, it is not much of a sacrifice, is it?

Any evaluation of a book must take account of the intended audience. This isn’t a scholarly monograph or historical inquiry, it is a 190-page discussion of scriptural teachings about prosperity written for the general reader. As such, it succeeds very nicely. Whether one is an LDS version of the rich young man weighing the cost of following Jesus or a modern-day widow with hardly a mite to spare, the book offers a full course of the “warning and counsel” promised in the first chapter, as well as a needed dose of perspective and encouragement fit for these trying economic times.

1. See Mark Ellingsen, Sin Bravely: A Joyful Alternative to a Purpose-Driven Life, Continuum, 2009. He writes: “Although regrettably he [Rick Warren] shares some commonalities with the proponents of the Prosperity Gospel (the belief that God will materially bless his followers who have the right frame of mind), analysis in this book will make clear that Warren and these preachers like Joel Osteen, Kenneth Copeland, Bruce Wilkinson … , and Creflo Dollar should not be confused” (p. 2).

FTC Disclosure: Post authors sometimes receive free review copies of books reviewed at this site. The authors of posted reviews are entirely responsible for the contents of their review, as well as for whether a review is ever posted. Reviews are posted primarily for the entertainment and enlightenment of Times and Seasons readers. Readers are encouraged to consult a variety of other sources before making purchase decisions regarding any product or service discussed at this site. No other compensation has been received by post authors in return for any review posted at this site.

51 comments for “Mormons and Prosperity”