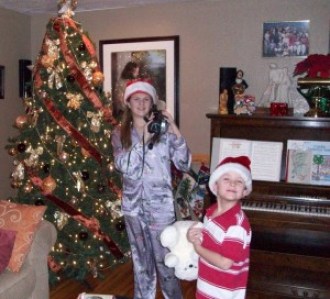 In April of 2008, our son Samuel was diagnosed with autism. He was four-years-old at the time, so by that point it was not a surprise. He had begun to noticeably regress at about three-and-a-half: his already slow language development halted, he stopped smiling, and, disturbingly, did not like to be held and pushed us away when we tried to hold him.  We had already had him assessed the previous year as having a developmental delay as well as Sensory Processing Disorder (SPD). Nevertheless, the autism diagnosis came with a certain finality that was devastating.

After initial weeks of grief and a certain amount of denial, we at moved from management mode to active intervention. We had already enrolled him in a special education preschool, started him with private occupational therapy, and started some in-home therapy. Elaine became a fearsome advocate for our son, taking on insurance companies and working actively with the schools and therapists. I have always been a hands-on Dad, but now, working with Elaine, a host of “helpers,” and the Lord, we have seen miracles with our boy. If my guest-blogging privileges continue a little past Christmas, perhaps I will write a more lengthy post about our journey, and successes, with Samuel’s autism. 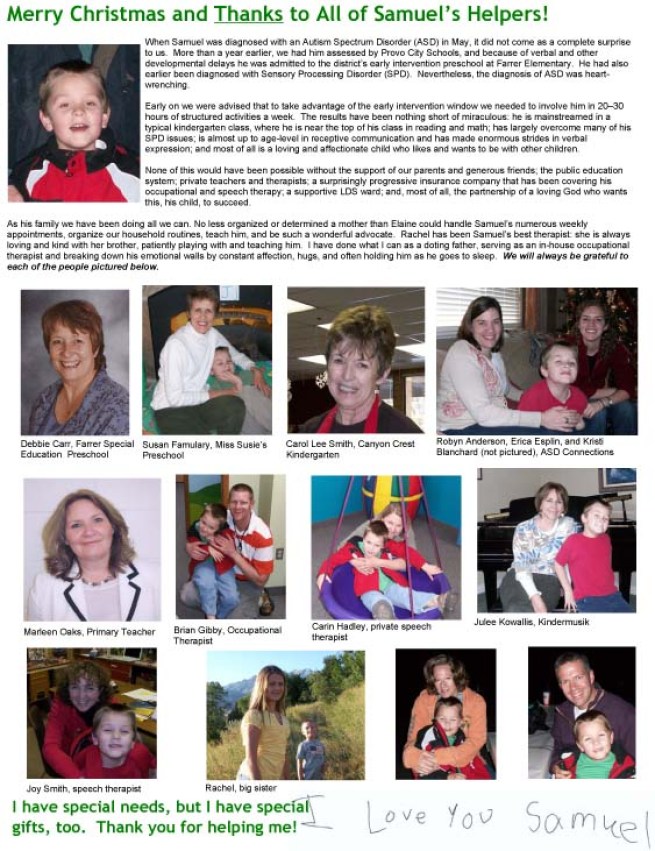 An insert into last year's Christmas letters, thanking all the teachers, aides, therapists, and other "helpers" who worked with Samuel in 2008

But in this Christmas week, I wanted to share some specific experiences that we have had with our special needs child, first the challenges that the holiday posed and then the wonderful blessings that we have experienced together as a family.

First, a disclaimer. We learned early on that when you meet one child with autism, you have only met one child. Autism Spectrum Disorder (ASD) presents a continuum of behaviors, disabilities, challenges, and strengths. The experiences, and successes, we have had with our son are not necessarily the kinds that parents with similarly impacted autistic children may be having. 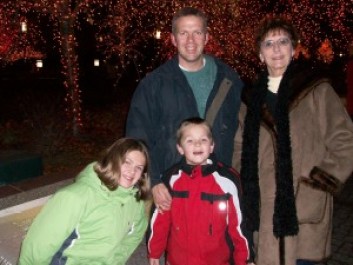 Last year was our first "successful" holiday season with Samuel, here with his sister, me, and Nana seeing the lights at Temple Square. Note my boy's smile, one of the miracles of 2008.

Samuel started out moderately impacted but is now very high functioning indeed. He is still somewhat verbally challenged, particularly in expressive language, but he has gone from very little language to being almost at age-level (what he can say and what he does say are two different issues). He is still socially inhibited, but is incredibly warm and affectionate with our family and with a slightly larger circle of familiar people. Promising is that he wants to be with and like other children. Still, changes in routine and patterns are very disturbing to him, and his lingering SPD issues make loud noises—such as singing in the ward Christmas program or even weekly family home evenings—upsetting to him (now read into this the fact that his father is one of the stronger baritones in the Tabernacle Choir and loves to sing more than almost anything!).

These factors combined to make his third and fourth Christmases almost complete disasters, for reasons that we did not totally understand at the time. He wanted nothing to do with our daily December Christmas devotionals and certainly did not want to be around for any singing. Different foods and smells at holiday time were not the source of excitement and fond associations for him in any way. They were new, different, and causes of anxiety. Our traditional Christmas Eve picnic by the tree was such a nightmare that when he was three we ended up putting him in a play pen nearby simply to keep him from running away and/or wrecking havoc. Still he cried the whole time, largely spoiling the evening, and getting him involved in our Nativity play was not really an option. 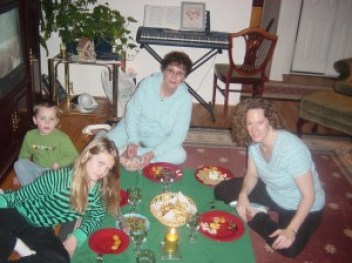 Our traditional Christmas Eve "picnic," an unsettling change in routine for Samuel

Christmas morning was, not surprisingly, a sensory overload, but we took some comfort that when he focused on a single toy he actually seemed to enjoy himself. In fact, two Christmases ago he played single-mindedly all day long, almost ignoring everyone and everything else, until he literally dropped shortly before midnight. Nevertheless, as important as Christmas traditions are to me, I was gripped by an increasing feeling of sadness. Not only was Samuel not learning the kind of things we wanted him to learn about the season, let alone enjoying it fully, his struggles were impacting the way the rest of were experiencing the holiday.

We have learned much about autism over the past two years—better, we have learned much about Samuel over this period of time. Routines and patterns are very important to him, but he can handle change if the right kind of preparation is done. He is a very visual learner, and he began to read at an early age. As a result, one of our specialists helped Elaine come up with the idea of using checklists when we mainstreamed him for kindergarten. Additionally, we purchases a large, magnetic whiteboard and divided it into columns for days and rows for mornings, afternoons, and evenings. Little signs, with both pictures and words, stood for school, speech, occupational therapy, play dates, family night, Daddy Night, and other activities. We have used that, and since then a conventional calendar, to help Sam Man know what is coming up tomorrow, the next day, the next week. Likewise sacrament meeting, which was always a trauma for Elaine (especially since I was more often than not in SLC for Choir, leaving her to handle him alone), suddenly became manageable once she learned how to help Samuel plan for each stage of the meeting and know how long each part would last. 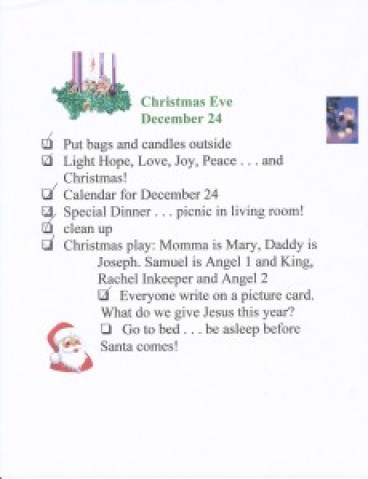 It was our daughter, Rachel, who came up with the idea about mid-December last year to make checklists for Christmas Eve and Christmas Day. She and I produced them on the computer, complete with some rudimentary graphics, and we reviewed them with Samuel in the week leading up to Christmas. Since one of the items was the Nativity play, Samuel immediately began to ask what he was going to be in the play. Rachel came up with a simple script and practiced with him all Christmas Eve Day. When Christmas Eve finally arrived, everything went like clock work—and I really mean clock work, because for Samuel everything needs to be done just as planned! 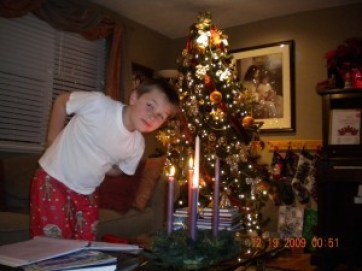 Samuel with our Advent wreath

But perhaps more than anything, it has been our family’s tradition of celebrating a modified version of Advent that has done more than anything to help Samuel understand what Christmas is all about and be excited for it. As we were getting our Christmas stuff out the Saturday after Thanksgiving this year (during the BYU-UofU game, in fact), Samuel lit up when he saw the wreath and the candlesticks. “Hope, Love, Joy, Peace, Christmas!” he exclaimed. “Where are the purple and pink candles?” The next day as we got ready for the First Sunday of Advent, Samuel got into our Advent Book and picked the readings for each person to deliver, including one for himself. On Friday and Saturday of each week this month, he has talked about the candle that we were going to light that Sunday. 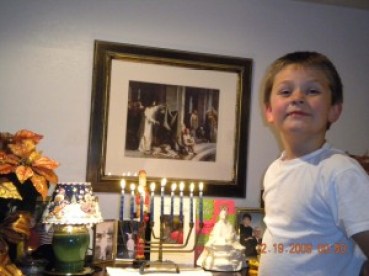 Samuel on the Eighth Night of Chanukkah. He follows along with me and can repeat the Hebrew blessing almost better than anyone else in the family!

In addition, we have a little family Christmas devotional each day in December, which consists of a story, a scripture, and a carol before family prayer. Last year we did not even dream of keeping Samuel around for the fifteen minutes “doing Christmas” took, so we read most of the stories with Rachel and then tried to call Samuel up from his computer just for the scripture and song, although most of the time he was not happy with the singing. This year, however, knowing that it was a pattern, he has stayed for the whole thing, cuddling with his mother while we read the story, (occasionally) taking a turn with the scripture, and, much to my joy, singing along with us for each carol, even relatively unfamiliar ones like “Bring a Torch, Jeanette, Isabella.” In fact, more often than not, as the evening progresses, Samuel is usually the first one to say, “We need to do Christmas,” and last night while Elaine and I were at a dinner party, he refused to go to bed before we got home because he did not want to miss our Christmas devotional. We light the Advent candles every night for our devotional, not just on Advent Sundays, and he and Rachel take turns blowing them out and opening the day’s pouch in our Advent calendar. 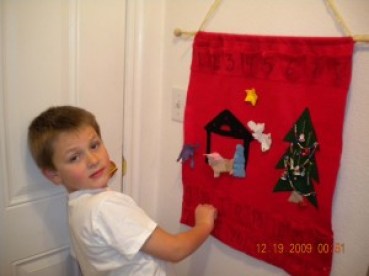 I concluded my “An LDS Observance of Advent” post by writing: “What started as a personally enriching practice for me and Elaine and then came to be a useful teaching device for Rachel has become a central and reassuring ritual for Samuel, helping him prepare for Christmas in more ways that I could ever have expected.” This is true, but it has also helped us, making us concentrate on the purpose and the hoped-for results of all of our Christmas-time traditions and rituals. 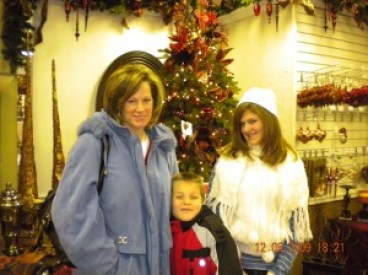 Elaine, Samuel, and Rachel on "Christmas Saturday," the day in December when we buy a new piece for our Nativity, go out to dinner, and then see the lights on Temple Square

Through these traditions and routines, I have realized this year what may seem like a very simple dream for many families: every night my family sits together, reading the scriptures, singing, and praying together. As I hear my wife’s pleasing alto, my daughter’s sweet soprano, and now, at long last, my son’s precious voice singing carols of the heart, I, the strongest and most experienced singer in the family, can often barely utter a note as my throat tightens with emotion and my eyes fill with tears of joy. As we celebrate the birth of our Lord together, the spirit is not only filling my home, it is reaching my precious son in ways that I pray will make an indelible mark on his memory and soul.

19 comments for “Christmas with Autism”