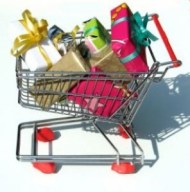 My co-blogger Sharon put up a most enjoyable post a few weeks ago. I liked it so much that I’m going to pay it the compliment of differing with one or two of its points. (In blog etiquette, after all, quibbling is the highest form of flattery.) Sharon points us toward a Christian anti-consumerist movement called Advent Conspiracy, which takes as is raison d’etre an apparent cultural contradiction. “What was once a time to celebrate the birth of a savior has somehow turned into a season of stress, traffic jams, and shopping lists,” the site’s copy reads. “What if Christmas became a world-changing event again? Welcome to Advent Conspiracy.” The premise here, as I read it, is that a pure, primitive Christmas, free from material excess, has been corrupted by a modern consumerist ethos that turns Christmas into a vulgar carnival of getting and spending. At heart it’s a narrative of apostasy.

Advent Conspiracy’s counter-cultural vibe is a hip standout, but the group’s basic message is one we hear from many corners every December. The message must resonate with a certain American experience. Philip Kennicott adds a twist to usual lament :

Every December, we regret the increasing commercialization of Christmas, as if we’re slipping further and further from some ideal understanding of the holiday (last seen in a Dickens story or film by Frank Capra?). But let’s be hardheaded and pragmatic about the facts. Christmas isn’t devolving from some Christian fantasy of love and regeneration. That ship has left the harbor. No, it’s evolving into the perfect, five-week spectacle of Americana, with all our best American gadgets and gizmos on display, with all of our basic habits of the heart—desire, acquisitiveness, competition—perfectly exercised. Black Friday is the first day of the American Saturnalia, a festival of capitalism and technology and American self-love all rolled into one.

Christmas isn’t falling from grace, Kennicott suggests, but ascending toward a state of perfect American self-actualization. Well, maybe. I suspect that if Christmas is indeed becoming more commercial, the cause lies not in some inherent quality of American moral character but rather on the American consumer’s changed prospects in a globalizing economy. Fifty years ago we would have bought more if we could have.

But I share his implied critique of the apostasy narrative, and this is my central point of difference with Sharon. It’s probably not the case that an ardent religious observance of Christ’s birth preceded and then deteriorated into a spectacle of material indulgence and excess. As an historical point, the two probably originated together. Kennicott mentions Dickens, and that’s not a bad place to start an investigation of modern Christmas. A Christmas Carol has been credited with rescuing Christmas from a dour Puritanism, and while that may overstate things a bit, it probably is fair to call the Carol a kind of cultural ur-text for the holiday. A few years ago I did a little study of A Christmas Carol, and it was striking the extent to which both impulses—the religious and the consumerist—co-existed in the text. Ebenezer Scrooge’s story is a quintessential Christian conversion narrative, but the story is also an extraordinary paean to material abundance. This is no accident, of course; the two themes inform one another closely. The images of abundance symbolize the richness of rebirth in Christ, the living water that springs eternally, and Christian bounty in turn provides a resolution to the material problem of malthusian scarcity that lurks in the background of the story.

Dickens’ accomplishment in Carol can be understood partly as a relocating of feudal traditions, with their old notions of noblesse oblige, to a newly industrialized urban context and its new structure of class relations. The old feudal Christmas itself, its manorial feasts and communal merry-making, has a long history. The roots of Christmastime excess go very deep. And if the old Yuletide celebrations appropriated certain ritual elements from ancient pagan observances, there is also some basis in Judeo-Christian scripture for an ideal of abundant excess in connection with religious devotion. In one gorgeous poem, for example, Isaiah describes “a feast of fat things, a feast of wines on the lees, of fat things full of marrow, of wines on the lees well refined.”

So call this a weak defense of the consumer’s Christmas. It’s a weak defense, because I’m ready with a hundred caveats. Isaiah’s “fat things” are full of marrow, and so our abundance should be full of meaning: empty consumption merely for its own sake never was joy. And as Chesterton observes, the special appeal of Christmas depends on the contrast between a bountiful feast and the bleak midwinter: if we indulge our consumer impulses without restraint all year, then Christmastime bounty means nothing. Nor should our seasonal abundance be entirely retail: music and food and beauty and fun and, crucially, reverence and awe and worship are all a part of the joy. I suspect that Sharon and I really are very close together in our sense of how the holiday should be celebrated. But this year my Christmas mise-en-scene will include a feast of fat things, a panoply of rejoicing and plenty fit for the King of Kings.

← Of QBs and Double Standards
Confessions of a Shopping Mall Santa →

27 comments for “A weak defense of the consumer’s Christmas”