In two weeks, The Road will open in US theaters. Based on the book by Cormac McCarthy, this is a film that I have been looking forward to with a mix of hope and trepidation. Hope that it will be true to the book, trepidation that it might actually put the images in my mind onto the big screen in all of their horrific glory.

This was a book that I read before the Pulitzer, before Oprah put her stamp of approval on it (I hate that I am so snotty that I have to offer those disclaimers, but there you go). It’s also a book that I had to read in small chunks, pausing to set it aside and go hug – hold, really – my son, Zachary. 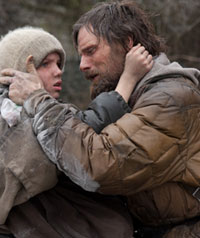 Viggo Mortensen in The Road

Zach is the son that I thought of as I read the novel. He is the son old enough to walk with me on the road, the one young enough to be innocent and trusting. As I followed the father through this journey, Zach is the son I watched along the way, exposing my fears, eliciting tears.

The Road is heavy. It is a book of visceral, lyrical prose that forces us to contemplate questions we don’t want to ask. It reaches deep into the darkest fears of a father and calls upon the strongest of protective instincts. I still feel an oppressive sense of dread and panic as I think and remember.

If you haven’t read it, go read it. Now. You have two weeks.

All reports that I have seen indicate that the film is true to the book. That it captures the bleakness and magnifies it to dark and stifling proportions. And yet, still, it captures the hope, the love, the sacrifice. From an early Esquire movie review:

You should see it for the simplest of reasons: Because it is a good story. Not because it may be important. Not because it is unforgettable, unyielding. Not because it horrifies. Not because the score is creepily spiritual. Not because it is littered with small lines of dialogue you will remember later. Not because it contains warnings against our own demise. All of that is so. Don’t see it just because you loved the book. The movie stands alone. Go see it because it’s two small people set against the ugly backdrop of the world undone. A story without guarantees. In every moment — even the last one — you’ll want to know what happens next, even if you can hardly stand to look. Because The Road is a story about the persistence of love between a father and a son, and in that way it’s more like a remake of The Godfather than some echo of I Am Legend.

Only this one is different: You won’t want to see this one twice.

The persistence of love between a father and a son. Our most cherished relationships, our strongest commitments, laid bare in a book and a movie. I’ll be there, opening night.