A 1904 magazine advertisement for Van Camp’s Pork and Beans features a photograph of the Andrew Jackson equestrian statue in New Orleans. Two cartoon children dressed in Dutch costume gaze at the monument, above this verse:

The history of Van Camp’s products is a little garbled – corporate legends with impossible dates seem to have been carefully promulgated – but as best as I can sort it out, it’s this: The Van Camp (or Van Campen) family immigrated to North America and settled in New Holland (now New Jersey) in the 17th century. By 1804, Charles Van Camp had settled in Indiana Territory as a farmer and wagonmaker. His son Gilbert was born in Brookville, Indiana in 1817.

Working alternately as a flour miller and a tinsmith, gained business experience and saved money until in 1860 Gilbert moved himself and wife Hester to Indianapolis, where he became junior partner first in the grocery of Fletcher, Williams & Van Camp, and soon after became proprietor of his own business, The Fruit House Grocery. Here he put his metal-working skills to work, and built what is touted as the nation’s first cold-storage food warehouse: He built a house with walls three feet thick, sandwiching cut straw between two sheets of iron. He also experimented with packing fruits and vegetables in tin cans, possibly the first man to do so. One of Hester’s specialities was tender beans flavored with cured pork – pork and beans – which Gilbert canned for his grocery.

Corporate history – and here’s one point where I can’t discern between fact and legend – says that Gilbert Van Camp won a lucrative contract selling canned pork and beans to the U.S. government to feed the troops during the Civil War. That seems rather a tall order for one woman cooking beans on her kitchen stove and one man handcrafting tin cans (they didn’t have a factory yet, and were only in the earliest years of their grocery business). True or not, the legend was perpetuated by another advertisement featuring the Dutch cartoon kids Hans and Lena, in 1904. Shown standing in front of the White House, the kids are accompanied by this jingle:

By 1882, Gilbert Van Camp did have a packing plant and had made Indiana the nation’s premier state for the production of canned foods, specializing in pork and beans, canned milk and condensed (he called them “concentrated”) soups. His son Frank joined him in the business that year; with a head for business, Frank soon became his father’s general manager. In 1891, while helping to clean up after a devastating fire at the canning plant, Frank reportedly made a discovery that turned disaster into triumph: While eating his father’s pork and beans for lunch one day, he either – depending on the version of the legend – absent-mindedly mixed his beans with tomato soup, or else opened a blackened ketchup bottle and deliberately poured it on his beans, and discovered that beans in tomato sauce were much more to his liking than the traditional recipe, which, like Boston baked beans, was flavored with molasses.

Which may be one reason why Hans and Lena went to Boston in a 1904 advertisement published in Scribners, touring in an incredibly early version of the automobile:

Pork and beans cooked in a tomato base became wildly popular, made Frank a millionaire, and sent him to California where he added tuna fish – under the brand name Chicken of the Sea – to his company’s repertoire. He found his greatest success in the years between 1900 and his 1909 death, when Van Camp’s Pork and Beans was the nation’s best selling brand.

The years 1903 to 1907, and perhaps a year or two either side of those dates, were also the years when Hans and Lena were used as advertising figures. These cheeky kids accompanied doggerel that was only half a step from irreverence with its claiming for Van Camp’s the heroic achievements of the nation’s leaders.

In Munsey’s Magazine, in 1904, before a photograph of Independence Hall, Lena is waving a flag and Hans beats on a drum made from a Van Camp’s can:

On Independence Day ’tis meet
That Philadelphia’s busy street
Resounds with drum and martial tramp
As Hans and Lena praise Van Camp.
Van Camp, who with his pork and beans,
Has freed a world of household queens.

In McClure’s in 1903, the two are seated at the base of Chicago’s statue of Lincoln:

Beneath the Lincoln Monument,
On great Chicago’s charms intent,
Now Hans and Lena here you see
Enjoying beans and liberty.
The slaves Van Camp emancipates
Are cooks in matrimonial states.

In 1904, the pair traveled from coast to coast. In California –

The Cliff house, on Pacific’s Shore,
Near San Francisco’s Golden Door,
Suggests to Lena and to Hans
The eighteen soups that Van Camp cans;
For those, the great emancipators,
Stand high o’er watery imitators.

– and at Niagara Falls, in the pages of Good Housekeeping:

Quoth Hans to Lena, “What a sight
To view Niag’ra in its might.
You know there’s wondrous power, too,
From every housewife’s point of view
In Van Camp’s Soups – so pure and fine;
They save much labor, Lena mine.”

By now you must think I’ve sold out to giant agribusiness. I haven’t – but ConAgra, if you’re listening, I wouldn’t turn down a case of Van Camp’s Pork and Beans.

This really does have something – however slight – to do with Mormon history.

I don’t know the date, or the magazine, and apologize for the poor quality of this image that I snagged off of eBay after having been outbid in the purchase of this advertisement months ago. Sometime during these years, perhaps during their 1904 cross-country tour from Niagara to San Francisco, Hans and Lena visited Salt Lake City. Here we see them seated near the Salt Lake Temple, offering their impudent rhyme: 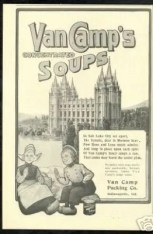 In Salt Lake City set apart,
The Temple, dear to Mormon heart,
Now Hans and Lena much admire,
And long to place upon each spire
Of Van Camp’s fancy soups a can,
That cooks may know the nobler plan.