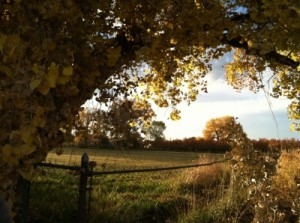 In New Mexico the weeks before Thanksgiving are High Fall, autumn in abundance, all gold colors and fruits. Thanksgiving is the high point of that season, and also its end. Then its sand hill crane season, Christmas, and winter.

In the weeks before Thanksgiving the cottonwood leaves turned bright pumpkin yellow. We were driving along the mesa above the bosque (the bosque is the cottonwood forest that grows in the river bottom) and it looked like hammered gold. Now the leaves are falling or fallen and they’re the light-tan color of old bones. A few weeks ago the apples were red on our trees and thick on the ground. Now they are all gathered in. Every day we slice and dry as many as we can, and every day we have to take a few rotten ones out to the steers in the corral. The chiles are all dried. The grass, green a few weeks ago, is now brown. Fall flowered and now it withers.

Since we’re done with the harvest and almost done with putting away the harvest, we’ve turned to the tasks appropriate to this part of fall. We’re spading, and spreading manure, and adding leaves to the compost pile. We are preparing, in fact, for next year’s garden. We’re planting cherry trees. Soon we’ll prune.

The seed catalogs are starting to come. The Lovely One and I are idly discussing what to plant, and where. A half-mile up the road, at my father’s place, he and I have also been strolling around, looking things over, and discussing. He’ll plant corn for the both of us, we’ve decided. And in the spring I can have some cuttings from his fallbearing raspberries. He’ll help me plant them.

We’re too busy–and next year’s garden is too present already–for us to mourn the old garden’s death too much.

some of the healing agents that our parents enjoyed seem not to be at work in our lives. Fewer and fewer are able to relieve stress by working with their hands and by tilling the soil.

As the rest of the talk shows, the stress he had in mind was the stress of grief and loved ones dying. He did not explain exactly how tilling the soil would relieve grief. I think he might have had in mind the way that tilling occupies your body and thus displaces grief a little, but also the way that tilling, or gardening in general, forms a kind of relationship with the earth and God’s creations. Having other relationships to fall back on seems fairly important for those who grieve. I notice that in Gordon Smith’s account of his child dying his gloom did not lift much until a new child was born, and I know that for myself losing Betsey Pearl would have been much worse without having Emma Caroline.

I wonder if gardens are also good for grief because they make the Resurrection seem so much more visceral. Gardens die every year and grow again every spring. Gardeners grow used to death in its season and they come to expect rebirth in season also, all part of the natural rhythm of existence. I think this effect is particularly strong given that we are part bodies, and that the things we learn bodily tend to sink deep into us. Our bodies have no experience with loved ones being restored to life, but our bodies do know the feel and smell and temperature and taste of death in the fall and life in spring. So when gardeners’ loved ones die, perhaps their bodily experience gives them just a bit more hope. I believe that this hope, this bodily, earthy testimony of the resurrection and of death as a natural season of life, is one of the reasons that the prophets counsel us to garden.

There is another reason. Gardens also teach us about fruitless death, about death out of season. Gardeners know the yellow summer withering of plants in too acidic soil. We know the filmy dust blight leaves on our hands. We know the smell of tomatoes rotting on wet soil. We know apricot petals falling like snow after a late frost. And we know that spring will come and life will return and death will be done away with, once more, whether death was seasonable or not. Unfortunately, in this world that kind of knowledge is important too.

My daughter Betsey Pearl died in March. She liked gardens and the harvest. Her first summer in Indiana we were away at the hospital the whole time and we did no gardening, though that Christmas her grandfather did take her around his place to see the nut trees and the apple trees he’d planted and the cattle. But our second and third summers we had a little plot in the community garden for Notre Dame’s family housing.

Betsey could not go into it the second summer because the lingering effects of chemotherapy made her vulnerable to mold and fungus. But we’d let her sit in the wagon on the white gravel path that ran by our plot, or we’d bring her little plastic chair, the kind that can be filled with water to weight it down, though we never did, and she’d sit on it and ‘help’ by putting gravel in the wagon or by offering her plastic trowels to us to use. When we started getting vegetables we washed them off carefully and let her put them in the wagon. We had to watch her close. She was two that summer and she didn’t always understand that crawling into the garden, or putting plants in her mouth, could be death to her. She deliberately pitched face forward into the mud once and we panicked. But by the end of summer she was well enough to go apple picking and pumpkin picking.

The third summer we spent in Indianapolis doing radiation because her tumor had grown back. Since we could go home on the weekends, we grew a garden that year too. They gave us a plot on the edge, one that was bordered by the white gravel path on three sides, so she could be closer to us while we worked. We did the wagon and the chair and the ‘helping’ with the gravel like we did the summer before. She started pulling weeds too, if they were close to the edge and if the soil was soft enough. And she had recovered her voice enough that she could talk to me while I worked. We had good times, working and talking for an hour or so, before the sun got too much for her bald head even with her bonnet on and we had to go in.

Sara took her berrypicking that summer, in the patch by the church that Ben Huff has talked about. She liked it. In August, after we’d moved to Oregon, we took her and her little sister to pick apples to an orchard in the foothills. I carried her some, but mostly she was able to push through the beat-down grass in her walker. I helped her pick some of the low-hanging apples and she picked others off her ground. She was proud to show our fulls pails off when we rejoined her mother who had been picking another variety a few rows over. After we’d finished with the apples we discovered a great hedge of wild berries growing along the edge of the orchard and went to pick them too. She was brave and picked them despite the thorns, until I got too worried and made her stop. Instead I’d hand her the berries I’d picked and she’d drop them in the bucket for me. She didn’t feel like that was enough, though, so she started picking berries out of the bucket, showing them to me, and putting them back in. ‘I help, Dad!’ she said. Her hands were stained red. I had to watch her carefully to make sure she didn’t eat anything. She still couldn’t swallow then, so anything she did eat would go straight to her lungs.

That was our only automobile trip to harvest that summer. But berries grew wild near our home on the border between a commercial park and and railroad. We picked there too, sometimes, taking Betsey and Emma and a picnic and a pail in Betsey’s red wagon, until the rains started in in fall.

Betsey got to spend a little more time on the land at Christmas when we visited grandpa and grandma. She watched us spading up part of the garden and Grandpa took her on the usual tour of the cattle. And in February, Oregon had an unusual spell of warm, dry days, so we went and picknicked over by the railroad again. Betsey had finally recovered enough to eat with us. We were happy.

She died in March, the same day the warm spell ended. We buried her in Arizona. The next few days her grandfather (my father) and I planted over a hundred new fruit trees in her memory.

Her death was neither just nor wise nor kind nor in her season, like an apple pecked green to the ground by crows.